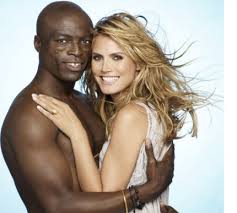 Hi guys, sorry I’m a little late posting.  This post is not about Seal or Heidi, it’s just the best photo I could find.  It’s interesting how few (quality) photo’s or images of black and white couples are available.  Anyway, enough said.  This post was motivated by my friend and fellow poet Curtis Longstreet, who has been urging me to post this poem.  He thought that because this piece had moved him and led him to many questions in his own life, that it would do the same for others.  I value his opinion greatly, and I am here today to touch on the subject of my life, being a child of a mixed marriage.  The poem itself expresses it quite well (I believe), but I would like to add that the story of my life is far more complicated and sweeping than the poem goes into. I was a child during the 1960’s and my high school years during the 1970’s were not wrought with violence and torture just the feeling of being and outsider and being bullied for the color of my skin,  but not (I don’t think) to any greater extent than that of any other child’s experience of being bullied for reasons of their own.  So, understand, I don’t consider my childhood much different than many others who have experienced similar prejudices in their lifetimes.  I decided to post this with the hope that it might be of some benefit to that one reader who needs something to relate to and perhaps might find themselves “less” alone for having read it.  Thank you Chris, Georgina, Jeremy, and Cherie, fellow poets from cosmofunnel…………..

As I grew up, in Germany, protected by military bases
It never occurred to me
That the color of our faces, made a difference to any one
In far off places
But when I came to America, the prejudice hand, began
To slap our stunned faces
And the hurt inside, grew to faith in friends, and away from men
Known to most as racist
The trials and tribulations, of being a “half breed” child,
created a kind of motivation
The protective instinct I felt, for my younger brother
And sisters
Followed me the rest of my life, as I traveled across this Nation
Many, many times
I experienced hatred and disrespect, in every form
And every situation
But the more I searched for truth, the more “real” friendships
I created
Unwittingly, I discerned a kind of infatuation, a kind of love
Of toleration
And the more I exposed myself, the more respect I seemed
To receive in thanks
And opportunities, that could only have come my way, through
Kind consideration
The black and white of it all, never came down to
True hatred
In most cases it came down to fear and ignorance, and love
Of this, Our Nation
So as I’ve lived this life, seeking the truth, through naivete’
And conflagration
I’ve come to know so much, about people and their
Environments
That God has let me know, I might just have something to share
To make some sense
Of all that I have experienced, I may just have found a way
To make a difference
To take up my pen, to use it as my sword, to reveal the
Black and white of it
To share what I have learned, it comes down to love, and
The faith in other men
And I feel that the time has come, to accept that I have been
Struck down by disease
Only to discover, that it is not just me, suffering because
Of other men
God took my ability to walk, so that I could learn to just
Slow down
To accept that there are those that love, and other men
That hate
But it doesn’t matter, because LOVE always wins
The race
So we needn’t worry, our own, unfair lot in this life
We need only accept each other
To have a happy understanding
Of life……..