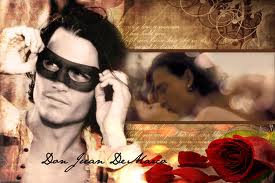 Have you guys seen this movie Don Juan DeMarco?…….If you haven’t you’re missing pure movie heaven!  Don Juan DeMarco is a 1995 romantic comedy-drama where the lead character (Johnny Depp) believes himself to be Don Juan, the greatest lover the world has ever known.  This movie is so charming and funny that I chose to write on it here because the “magical” power of the mind is actually an unseen character in the film that jumps out you as plain as day.  Thereby allowing it to qualify for this blog on Metaphysics (lol!).  Truth be told, I just friggin’ LOVE this film, and the way it so lovingly draws you into it’s beauty.  The movie draws from two different sources; the modern day story is based on Jeremy Leven’s (the films director) short story called “Don Juan DeMarco and the centerfold”…..while the back-story is based on the legend of Don Juan, as told by Lord Byron in his version of the legend.  The way this film is weaved together creates another character all together existing in the minds of Johnny Depp and Marlon Brando (the Psychiatrist)……..
Allow me to clarify, Johnny Depp’s character, John Arnold DeMarco, is a would be suicide who is found atop a building dressed like Zorro and claiming to Don Juan.  Marlon Brando’s character, Dr. Jack Mickler, talks him down from the roof and takes him for a10 day review in a mental institution, where he proceeds to interview Don Juan.  This is where the movie finds it’s footing.  They go through a maze of seduction and devotion that is so beautifully accompanied by an original soundtrack that you are hypnotized into another world where nothing but beauty, passion, and Love exists in it’s extreme.  Wow!! It is SOOOO good I’m still smiling……..The cast is stellar of course, including three of the best actors ever;
Dr. Jack Mickler:   Marlon Brando
Don Juan:   Johnny Depp
Faye Dunaway:  Marilyn Mickler
Selena:   Ranchera Singer
Rachel Ticotin:  Dona Inez
Talisa Soto:    Dona Julia

Depp’s performance is “OFF THE HOOK” (or truly magical) as usual, and what does anyone ever say about Brando, the man can do anything with a role, he shines here.  The interviews between the two set the stage for the magic.  Don Juan begins to tell the story of his sexual escapades and leaves the doctor with his mouth hanging open, and not only is mouth open but his soul is begging for more and more.  (lol!) fun stuff.   Don Juans tales are so vivid and intricate that Dr. Mickler begins to believe in the possibilities and consequently his own love life is set ablaze with his wife, Faye Dunaway.  In one scene Don Juan is the new love interest of the Sultana of an island nation, and must dress as a woman to be hidden from the Sultan.  When the Sultan nearly discovers the affair Don Juan is forced into hiding, and where else for Don Juan to hide when he’s dressed as a woman, you guessed it, in a 1500 strong harem of beauties!!!   Needless to say, Don Juan receives most of his education during the year he is so tragically forced into submission (lol!) Sorry, but it is really tastefully done and I promise you, Funny!  In fact, this movie is so funny and romantic that I will not ruin it with details here.  Bryan Adams adds a FANTASTIC song to the story, “Have you really ever loved a woman?” that is so perfect that you sit amazed at the sheer beauty of it all.  The Mexican towns and music of Selena, has love permeating everything in this film, even the sword fighting scene is romantic.  At movies end, Don Juan has managed to convince everyone that if there really is a Don Juan, ——then he’s it!  Awesome!!  It is so much fun that I almost pee’d my pants twice out of laughter and delight.  I cannot put into words the “charm” of this film so, suffice it to say, that if you have a love interest in your life, go see (or rent) this movie, and when the movie ends be prepared to be sexually mauled by your lady love!!!   Metaphysics has no words for the “magic” created in this film, but I DO……..SCRUMPTIOUS!!!………I am Dartanion2………and that’s the way I see it!………cheers….t xx