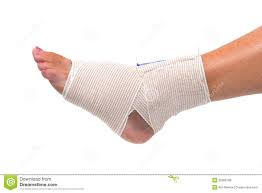 So, yesterday I went to the doctor for foot injections.  I thought I was going to be put under and then injections injected, after which I would awaken like routine.  Turns out, there was nothing routine about it.  First, there was no anesthesia, I was placed in a small exam room when my Doc came in to explain that we were going to do this topically so we could get some direct results.  They sprayed a topical on the area directly over the three main nerves going into the foot where they took long needles directly to them.  These needles have cameras in the tip.  The first injection went in and both the nurse and the Doctor looked at me oddly, when I asked why they said “look”.  I looked down at blood spurting as they asked if I take aspirin.  I said what’s that got to do with anything, there wasn’t,  what they were shocked about was that hadn’t moved at ALL.  No response to a needle stuck directly in to a main nerve..  Not Good.  We did this twice more.  Same results.  What does this mean?  Means that my nerves in my feet are nearly dead.  The injections put nerve blockers which were to end ALL pain for at least 48 hours.  Today there is no difference.  Except the injections sites hurt today, which means more pain than usual.  This all means that we move to the next step ……..abdominal blockers………if that doesn’t work, we move to the “Spinal Cord Stimulator” and a biopsy.  Over all a “NOT SO POSITIVE” day.  It’s funny what the mind does when you get this kind of news.  Imagining all the worst scenarios is one of them.  I was supposed to be supportive for a dear friend when I came home,  but I couldn’t bring myself to be positive enough to make the phone call she was expecting, needless to say, I let her down because I was wallowing in self pity.  Several hours later I called her to apologize.  Guess what she said..”I was just worried about you!”……I’ve been much better ever since.  Words, are so important.  MORE important to an individual who is sensitive to health questions, because they face questions of their own mortality. SO what I learned was………WORDS!  They are so important……..the fact that she was more concerned with me when she was having problems of her own………brought me out of my temporary pity party.  I’m smiling again today.  WORDS.  There so important.  So, I know me………..come what may, I will be a fighter.  And most of all, I will be sensitive to WORDS as they carry so much weight.  The words of my friend from yesterday will met with enthusiastic praise today……..because today, I am a poet.  And poets know words………..WORDS!……….I am Dartanion2…….and that’s the way I see it…………..cheers………..t