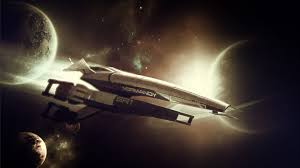 Hi guys, I wanted to talk a little about the world of Science Fiction.  I know that is more than just a mouthful because the world of Sci-Fi is so HUGE.  Science fiction has been predicting the coming trends of technology and the designs of future devices for so long that we’ve forgotten just how important things like Comic Books or Cave drawings really have been to the progress of humanity.  The first thing we do to ourselves, as a society, is to introduce ideas and designs into our youth by means such as Saturday morning cartoons, and when that child grows up, the idea of a space ship is no longer a cartoon but a concept to admired and pursued into manifesting itself.  Now, go farther back than that, drawings on walls, thousands of years old, depicting UFO’s and alien visitation.  We know that they are there, but what do we do.  We cloud it over in doubts and debunking.  But somewhere there are those that take these “Stretches of the Imagination” and put them into practical uses.  Like films and car designs.  Artwork and songs.  Comic Books and poetry.   Video games and Fairy tales.  Bibles and politics.  Until the idea of building a ship the size of a city block that will eventually explore the deepest recesses of Space is not only acceptable but a working part of the everyday common language.  I mean when you’re sitting around with friends do you ever say or hear things like, “I wish I could read her mind?” or ” I feel transported!!” or “I can see right through you!”…..these types of expressions seem harmless enough but when they are ingrained into the common language of men they become accepted as a part of common knowledge and no longer something unattainable.  Remember the “JETSONS” cartoon on Saturday mornings?…..A lot of those fantastical things are actual parts of todays reality.  Computers where we can talk to each other and see each other at the same time…..these types of things were being discussed in the 60’s and 70’s by great minds like Isaac Asimov and other great Scientific thinking ,minds.  Here’s a direct quote from Asimov’s 71 Glimpses of the future…..” Someday, when the moon is a busy world, with miners, electrical engineers, metallurgists, and astronomers all doing their work upon it, will tourists go there too? What would there be to do on the moon?  What would there be to see?”  These are the types of things that get passed down to generations and the power of words.  But what’s really interesting is that Sci-Fi is at the forefront of all of those forwards thinking minds because it requires artwork and design to complete images in peoples minds.  So, things like “Star Wars” and “2001 a space Odyssey” become predictions and glimpses of the future manifested by the minds of the world of Science Fiction.  Not only does Sci-Fi have the lead on design of machines and utilitarian devices but also on things like the clothes we wear, the style of our sunglasses, the look of our subway systems,  the nature and stylings of new buildings the world over.  It’s everywhere we look.  The world of Sci-Fi is a very visible Guideline that when you begin to really put your mind to reminiscing about all the things of the past that are in existence today, it becomes mind blowing in it’s ramifications and far reaching in it’s compelling nature. My favorite Asimov quote speaks volumes;  ” The actual future will be what circumstance, the human will, and human intelligence make it, and we can only hope that all will conspire to produce something good.  My role, as a futurist, is to reconnoiter the territory up ahead so that humanity, in it’s travels through time, may have a better notion of what to aim for and what to avoid.”…..now, if a guy, some 50 to 60 years ago was thinking this far ahead, what must the minds of kids with access to the internet and most of the information the world has ever produced available to them ALL in ONE place…….GEEZ the potential of those budding minds is SO mind boggling that it almost makes me wish I was a part of the youth of today.  Because the ways I which thet are about to change this world…..are going to shape humanity for thousands of years to come.   We are going to need new things like the new version of “The Declaration Of Independence” governing the hopes and desires of an entire world population.  We are going to need honest and forthright men to deal with the new discoveries our satellites are about to reveal to us……the world is changing so rapidly that it is NECESSARY that spirituality become a LAW of our humanity, so that the GOOD and the RIGHTS of all are protected.  Holy men will become world leaders, right along side corporate executives, and Military influences…..it will all appear to be the same, but the worm will have twisted and good will appear to be evil, and evil will charm your pants off.  My greatest wish for our future is simple………That GOD become central to our thinking and rationale, AND, that the guys in garages, drawing and writing Comic books……are genius’s for good!!………I am Dartanion2……..and that’s the way I see it………..cheers……..t  xx