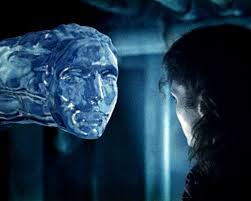 Hey people, before I go in to the details about the film “The Abyss”, I’d like to offer some little known facts about our Oceans.  What better place to begin than along with THE best movie ever made on the subject of our Oceans.  First of all did you know that 94% of life on earth is Aquatic?..or that 70% of the planet is Ocean, with an average depth of more than 12,400 feet.  Given that light can’t penetrate further than 330ft. below the waters surface, that means most of our planet is in a perpetual state of darkness.  Pretty strange thought don’t ya think? I mean just the word darkness is spooky enough to warrant a little investigation perhaps carrying some lights?(just a thought)  We’ve only, actually, explored 5% of them, we have better maps of the planet Mars than we do of the Ocean’s floor!  This just keeps getting spookier and spookier.  why are we exploring other planets before exploring our own?  Because we are physically incapable of making the journey past the point of implosion, that’s why.  Although, (and you can’t quote me on this) it’s my understanding that we Have landed a deep sea submersible on the ocean floor and taken some VERY strange photograph’s of life we had no idea even existed. (little more food for thought)  The deep sea is the largest Museum on earth. There are more artifacts and remnants of history in the ocean than in ALL the museums on Earth combined.  This is pretty interesting; There are underwater hot springs that top off at a whopping 650 degrees Fahrenheit, that’s hot enough to melt lead.  And finally, the longest mountain range in the world is underwater.  It’s called the “Mid-Atlantic Oceanic Ridge”!  It’s 35,000 miles long,(think about that a sec, it’s like 23% percent of the face of the earth) the peaks of this mountain range are higher than those of the Swiss Alps. These are only a few of the facts that I learned about yesterday, I actually had a conversation about the ocean after researching it, and the conversation got so interesting that it lasted well over an hour so, if you’re interested the internet is overflowing with info. on the subject.  The most interesting fact to me was that when you come right down to it we really don’t know squat about our oceans except that Dolphins seem to be The most intelligent and willing communicator with humanity (but that’s entire post all to itself) and so I walked away with this; The OCEANS are truly the last great unexplored wilderness on Earth……..
Having said All that, let’s ta look at THE VERY BEST underwater film ever made. It’s a James Cameron film who is so well known for his Directing and writing abilities that if he just put’s his name on a project movie goers will line up to see what he’s come up with next.  You might know him for his “TERMINATOR” films. This movie is so filled with amazing scenes and sequences that I’m not going to give you an outline of the film I am going to touch on some of my favorite scenes but, mostly, I’d like to talk about the controversy and the actual making of this EXTRAORDINARY visual experience.
“THE ABYSS” is a 1989 Science Fiction Adventure film starring Ed Harris, Mary Elizabeth Mastrantonio, and Michael Biehn.  When an American Nuclear Submarine sinks in the Atlantic, the US search and recovery team works with an oil platform crew racing against time and other Russian recovery subs to recover it’s payload.  What they discover will blow your mind and set your imagination on fire.  The special effects in this film, even though they are over 20 years old were so cutting edge that reproducing them today would still be a chore.  The picture you see above is an example of what I’m talking about, what you’re looking at is a tentacle that is inspecting the contents of the underwater oil platform where 90% of this film takes place.  It’s water being controlled by an unknown intelligence.  James Cameron had originally planned to film in the Bahama’s but wound up shooting at the Cherokee Nuclear Power Plant outside of Gaffney South Carolina. It had been abandoned after a local power company spent 700 million dollars in construction. The underwater sequences in two specially constructed tanks. The first held 7.5 million US gallons of water.  At the time, it was the largest of it’s a kind, in the world.  It took them 5 days to fill with water, just to give you an idea of how big it was.  Cameron’s production company had to design and build experimental equipment AND develop state-of-the-art communications systems that would allow him to talk to the actors and record dialogue while being filmed completely submerged.  This was the first time such an undertaking had even been attempted.  There were so many problems for the actors that most of them still refuse to even discuss the experience.

There is a scene in this film that I have to bring attention to.  It is the most powerful and engrossing few minutes of love and faith in another human being that I have ever seen portrayed on film.  In it, Ed Harris and Mary Elizabeth Mastrantonio’s characters are trapped in a mini-sub.  They were once a married couple and have since broken up but neither has tossed their wedding rings.  The sub has sprung a leak and is beginning to fill with water.  They are only about 150 yards from the underwater oil platform and their home under the sea.  Well, they call to the platform to be picked up but their is a tornado topside and the communications have been temporarily disabled so they begin trying to plug the leak so that they can wait out the storm.  Well needless to say, the can’t stop the leak and the compartment begins filling with water.  They realize that there is only one scuba suit with which to swim back to the platform .  Which means one of them is about to die.  Well, as you can imagine, the tension is building as the water is rising.  He says to her she has to take the suit  because she designed the platform and her knowledge is invaluable to the crew.  She thinks for a moment realizing just how much she really loves this man and comes up with another idea.  The water is rising quickly.  She explains to him that he is a much stronger swimmer and that all he has to do is carry her back to the rig.  He begins calculating the distance in his mind and says “You’ll drown before I can make that swim Lindsay!?”  she says “I know. But the water temperature is just above freezing.  My blood will go cold and my body temp will preserve oxygen in my brain.  You can revive me!”…….oh my god, the look in his eyes just makes the entire room go silent.  The last few moments as he puts on the helmet and she’s fighting for her last few breaths of air and she’s looking at him through the window of his helmet are the most heartfelt moments on film I’ve ever experienced!  Her last few words; “You can do this Virgil, I love you Virgil. You can do this, Oh my God maybe this wasn’t such a good idea…”…………………NO! I won’t tell you what happens.  You HAVE to see this movie, there are so many unbelievable scenes in this film that you really MUST see it to believe it!
After this film came out there was apparently a “lot” of animosity that never really came out in the press.  At first, some of the actors refused to refused to go out and “plug” the movie on TV and talk shows, which is normally a part of their required duties.  They wouldn’t comment on the experience and Ed Harris (don’t quote me on this) said he would NEVER speak about it again.  It must have been extremely difficult on the actors, taking underwater direction, with 40% of the filming being shot underwater, and the incredibly tight quarters for the actors on screen.  It’s an obviously interesting back story when the actors don’t want to talk about it.  All of the technological efforts and the extreme working conditions aside, this film came out several years later with a limited edition version of the movie that is still bringing huge amounts of rental and video monies.  It is truly a feast for the eyes…..the special effects are unparalleled because no one has even attempted such an undertaking.  If you’ve never seen this movie………….allow me to urge you to make an effort to see this movie ……………it will NOT disappoint you………promise! (smile)……………I am Dartanion2 ……….and that’s the way I see it…………cheers…….t  xx