Hi Guys!!…..yesterday I got a request for more info on energy…….here’s one of my favorite films and more info on the nature of energy and its possibilities………remember to click at the bottom of the paragraph to read the ENTIRE post……..such an awesome film………..enjoy guys……….doc say i’ll be back to normal in a few days………..hugs-n-smiles………..tony xx

Metaphysics and the Movies according to Dartanion2 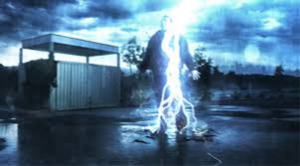 So, have you guys seen the movie “POWDER” ?  If you have, then you knew that I’d be getting to this film eventually.  This film is all about the very things this blog concerns itself with.  Namely, ENERGY!  The picture above will give you an idea.  The movie, is tailor made for this blog.  A woman is pregnant as she walks down the street one evening, and she is suddenly struck by lightening.  The woman dies, but not before they save the child, who is born premature.  The father cannot handle the situation so the child is raised by his Grandparents, on a farm.  The child grows up never seeing television or meeting anyone from the outside world.  The Grandparents keep him hidden when other people around (for the most part) but he does go outside each day to do his work on the farm.  He is Albino white and…

1 thought on ““POWDER” the movie, and the evolution of energy….”